One of the most difficult things in life is moving on. Very few people like the concept or idea of having to move on, mainly because it is not an easy or fun process. We want to get to the next thing in life,
but we don’t want to move on from the place we are, or from what we’ve done. We like the end product, but hate the process.

The Israelites were a group of people who had to spend time moving on from what they had grown accustomed to and known. They were stuck in slavery to the Egyptian people, and God sent a not so fearless leader to their aid. Moses was used by God to lead them out of what they had always known (slavery).

Moses then lead them to the promised land that God had established for them, and for the most part he did a pretty good job. Until one day, the people were complaining to Moses and Aaron (Moses’ brother) saying they didn’t have anything to eat or drink and they would rather be back in Egypt with what they had always know. So, Moses and Aaron went before God and ask Him what to do. God told Moses to gather all the people and speak to a rock and water will come out of it. Moses and Aaron then went out and did this, except for Moses took matters into his own hands and struck the rock, because he was annoyed at the people. (This is all true, check out Numbers 20.)

Because Moses made this pivotal mistake of striking the rock instead
of speaking to it, he was not going to be able to enter the promised
land. Moses then became bound by what he had done, and missed out on
what God had originally called him to do.

If you go back a few chapters in Numbers (13), you see a different
guy named Caleb. Caleb was part of a group of spies that Moses sent out
to scope out the land of Canaan and see what all was there. While they
were there, they took a cluster of grapes to take back and show Moses.
When they got back all the spies, except for Caleb, said that
they couldn’t take the land because of the people there. Only Caleb had
faith enough to shut everyone else up, and tell Moses the truth. Caleb
told him they could take the people.

Far too often we are held in bondage by where we’ve been and what
we’ve done, and also by the fear of what comes next. We would rather
strike the rock out of frustration and anger, than to take the grapes
and speak in faith.

“We can’t allow what we’ve been through to keep us from what we’re called to.” 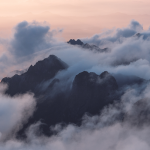